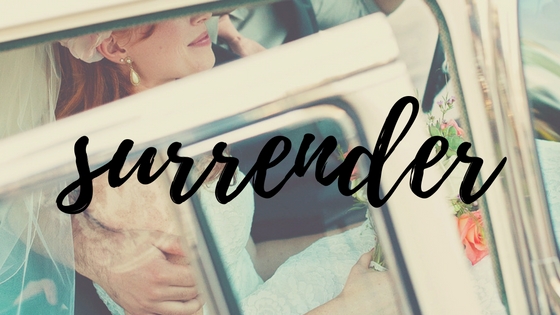 “If my life is surrendered to God, all is well. Let me not grab it back, as though it were in peril in His hand but would be safer in mine!” –Elisabeth Elliot

Surrender. Ya know how you can say a word over and over again, and it starts to sound weirder and weirder? The word “surrender” has been running through my mind for days, and surely it is starting to get tired. It sounds weird; it looks weird; and I’m worried it will start to lose its meaning.

A couple of weeks ago I was at dinner with some friends. One of them asked the whole table if we made any New Year’s resolutions (a really weird question to be asked in July). One girl said she doesn’t make New Year’s resolutions, but she does pick a word for the year. So we all decided to go around the table and choose a word for the month of July. I think by now you can probably guess my word– surrender. I think the Lord placed this word on my heart for a multitude of reasons, but one reason in particular flashed across my mind in big, bold, all-caps, lit up letters.

About a month or so ago I wrote about some of my thoughts on dating, one in particular being that I think it’s ok for girls to tell guys that they have feelings for them. After a lot of prayer, thought, and wisdom from a couple of close friends, I felt convicted to take my own advice. So I prayed and worked up the courage to tell the guy I wrote about that I had a crush on him. This was hands down one of the scariest things I think I’ve ever done, and I can’t say I ever want to do it again. But the conversation went surprisingly well, and I felt a thousand pounds lighter afterward. I told him, voice shaking and mouth getting dryer by the second, that I really admire and respect him and that I really value our friendship. Then I straight up said, “I have had a crush on you for an embarrassingly long time.” His response was great. He said he really values our friendship too and he really respects me and is really proud of me for telling him how I felt, but he only sees me as a friend. This was totally the response I expected to get, but then he asked me what he could do to make our friendship healthy for me. I was so thankful for his response, and I 0% regret telling him how I feel.

This is where the word “surrender” comes in. If you’ve been reading my blog at all, then you know that I love looking up the definitions of words (the Merriam-Webster app is one of my favorite apps!). So, the definition of “surrender” is 1) to agree to stop fighting, hiding, resisting, ect., because you know that you will not win or succeed; and 2) to give control or use of (something) to someone else. God does not mess around– He goes straight for the jugular (or heart in this case)! I have so needed to surrender my feelings for this guy and my dreams for the future, but I have been holding on so tightly, so desperate for any bit of hope I could get.

Surrender. The Lord knew that for the sake of my life and my well-being, I needed to surrender to Him. I am believing that this dude (or the dream of a relationship with him) could give me hope, joy, fulfillment, and so much more. I  am not believing part of the gospel. The gospel says that Jesus is and will always be our only source of true hope, joy, and fulfillment. Jesus was sent to die in order for us to experience the fullness of life. Men were not created to “complete” women (and vice versa).  Men (and women) are flawed, broken, imperfect. So there is no man in this world who will never fail me. Thinking a guy will make everything in my life so much better (think of any romantic comedy you’ve ever watched) is putting an expectation on him that he wasn’t created for. That’s too much pressure!

So here I am, attempting to surrender my heart, and everything in it, to the Lord in the best way I know how. I’m learning that surrendering my hopes, desires, dreams, and plans to the Lord is not a one-and-done sort of thing. It is something I am having to do everyday, multiple times a day. But the Lord is teaching me. He’s growing my faith. I pray that He takes my desires and molds them to match His desires. He is using this season in my life for my good and for His glory. Amen.